Why Am I Not Over My Ex, According to Science (Stop Doing This to Yourself)

It was the second week after a breakup with my wife that would end in a divorce.

I felt miserable and thought this was the end of the world.

But then I started to reflect on how I was dealing with the breakup.

I realized that I was wallowing in self-pity instead of helping myself heal.

Here is what I learned—you can use these lessons to ease your pain quickly.

Check out the companion video if you don’t want to read:

Research shows that romantic breakups can cause bereavement symptoms. 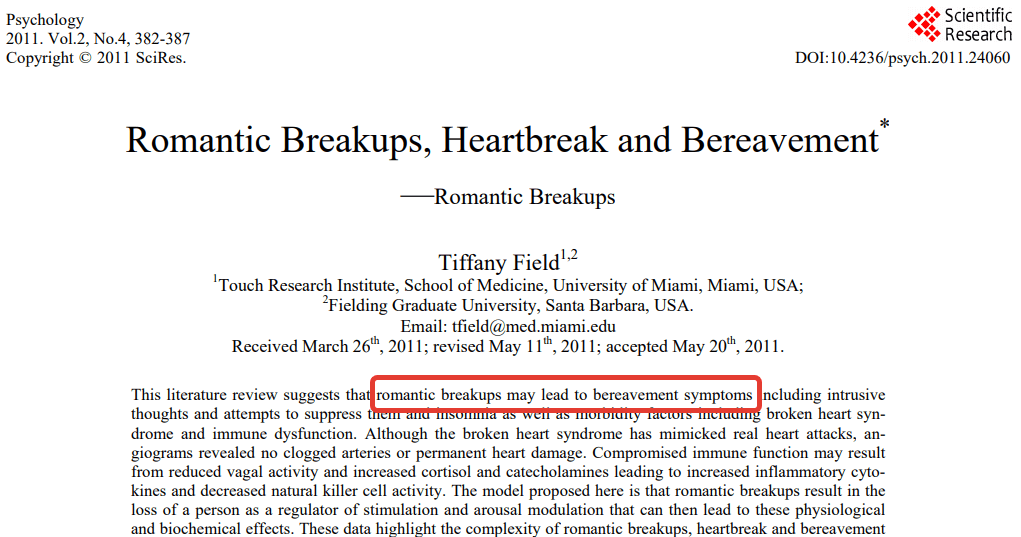 These symptoms are similar to those experienced following the death of a loved one.

It’s amazing how much trouble we can cause to ourselves by grieving the loss.

When you know these symptoms, you feel motivated to stop them quickly.

You can’t stop thinking about your ex after a painful breakup.

It’s normal to do so at least once a week.

But if you do it more often, your repetitive thoughts will ingrain self-pity.

See, repetition plus intense emotions etch beliefs and thoughts into your mind quickly.

These thoughts often contribute to insomnia or dreams about your ex.

Which only makes things worse.

You think about the loss during the day constantly.

As a result, you have trouble falling asleep or sleeping well.

Your cortisol levels increased due to stress also contribute to poor sleep.

And then, after you wake up, you feel even worse.

So, it’s a self-perpetuating cycle:

Surprisingly, a physical heartbreak is a scientifically proven fact.

You may experience physical pain in the heart or chest after a breakup.

These are the possible reasons:

Although heartbreak mimics symptoms of a real heart attack, it’s different from it: 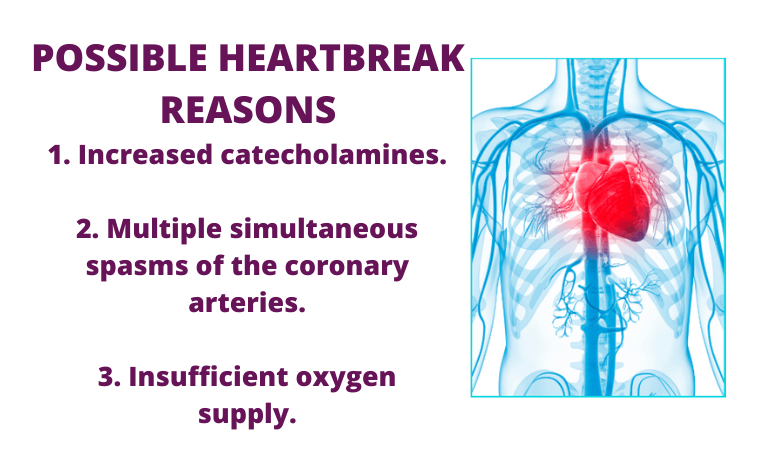 But the prolonged elevation of stress hormones and inflammation can impair immune function.

Stress hormones cause the death of cells in immune organs.

This condition may last for as long as six months. 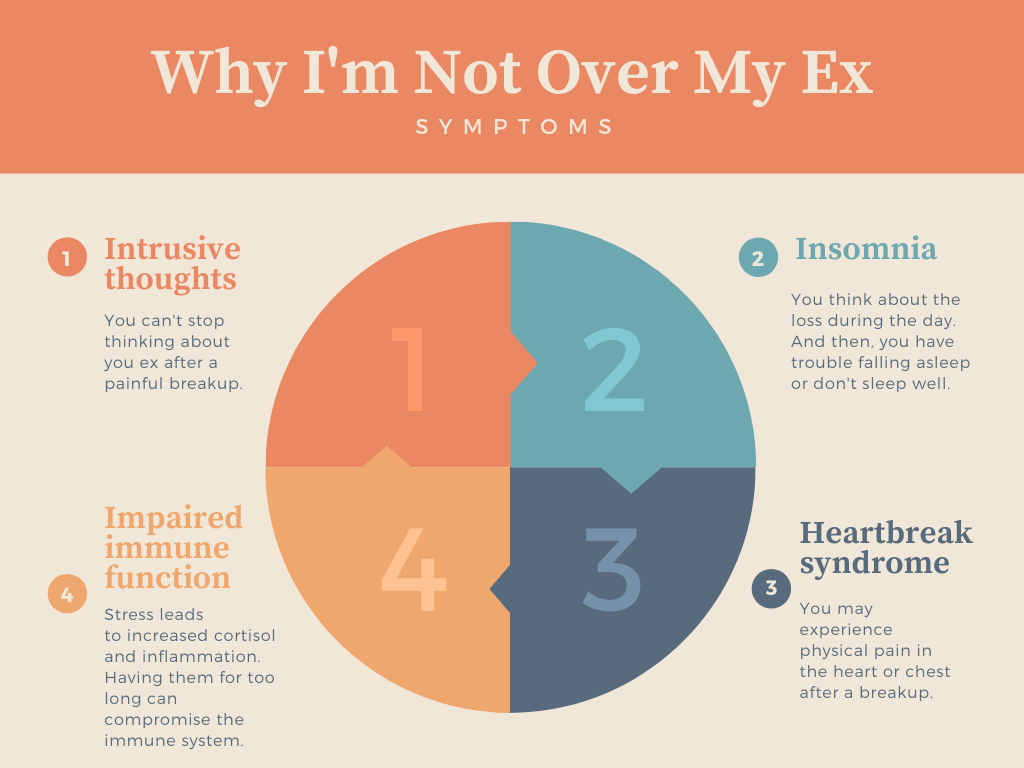 Why am I not over my ex

Now you know when you should catch yourself to avoid damage to your health.

So, let’s move into the second component: how exactly do you cause them emotionally?

By knowing the causes, you’ll be able to stop yourself from hurting yourself.

Cause 1: You don’t allow a few days to “fall apart”

You need to allow yourself to grieve over your loss.

Jason Ackerman of Best Hour of Their Day shared his experience of dealing with a breakup:

After one particularly bad breakup, I spent one month watching romantic comedies and crying. 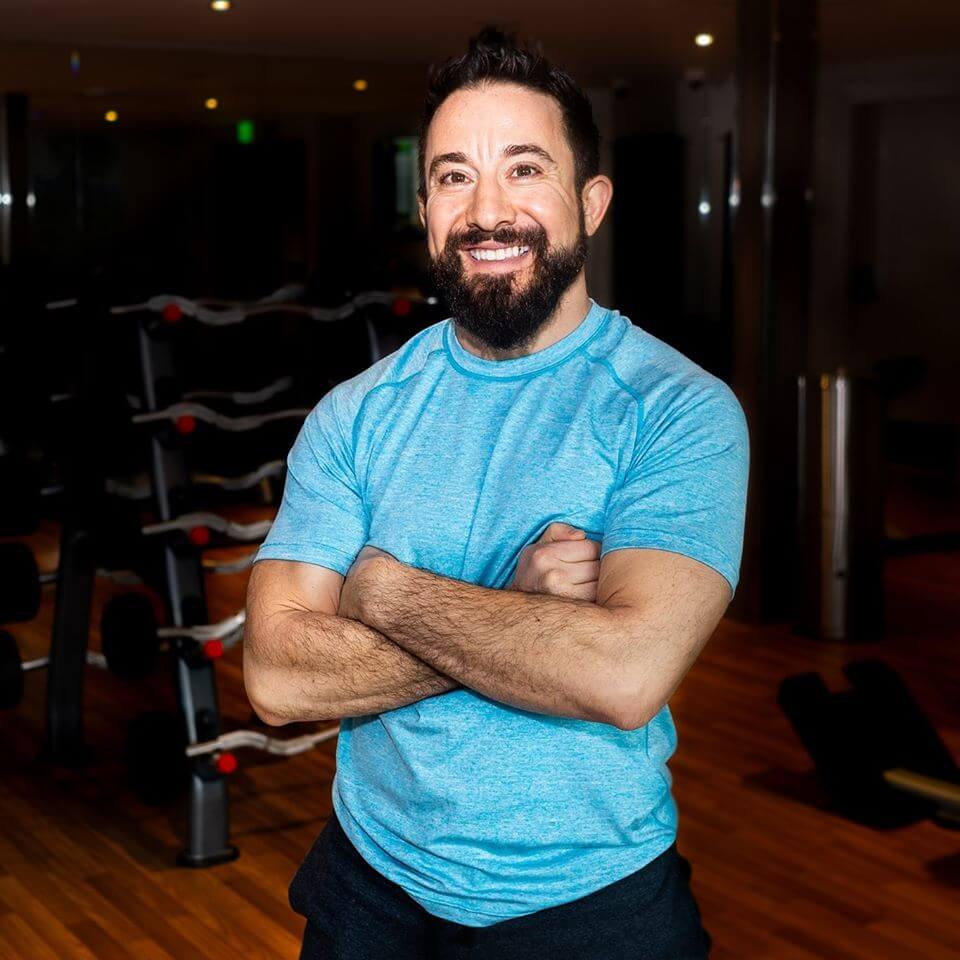 Perhaps, one month is too much.

But take as much time as you see fit.

Let your emotions out: cry, scream, feel sorry for yourself, beat a pillow.

Whatever you do is good because suppressing those emotions will only make them worse.

If you don’t do that, it’s difficult to move to the acceptance stage.

You’ll keep hanging on to the emotions.

And they’ll keep haunting you.

Cause 2: You don’t accept the breakup

Just like any other addiction, love doesn’t go away fast.

A life coach Andrew Wuellner uses a great metaphor for this:

Your significant other leaves a handprint on your mind. 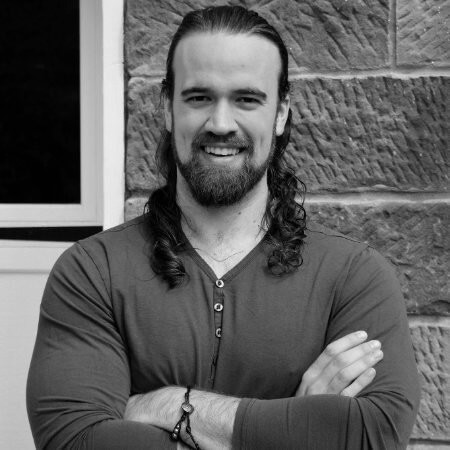 Removing that handprint is a slow process.

You need to allow time for rewiring to happen.

If you don’t do that and want results right away, you’ll make it more difficult for yourself.

But if you look at it as an inevitable process, it’ll be easier.

For example, my divorce was the lowest point of my life.

I felt so bad that I wanted to get my ex back.

But I knew that wouldn’t help my case.

So, I focused on accepting that it would take time.

I kept focusing on how today was difficult but tomorrow would be easier.

And with this reframing, I started feeling better in about 3 weeks.

Cause 3: You focus on regret

Sure, a breakup makes you find tons of reasons to regret the things you said or did.

Regret is normal but wallowing in it isn’t.

It’s just a tool to learn from our mistakes.

Think of your breakup this way: your life is a path.

You walk this path and learn.

Everything that happens to you is a gift from the universe that makes you a better person:

I know It’s difficult to think this way after a breakup occurs.

But in retrospect, all those seemingly bad experiences seem positive.

You think back and say, “Oh, I did need to make that mistake back then.”

So, as you’re regretting your breakup now, remember this:

The universe has never given us a challenge without also giving the strength to tackle it.

What did Jason Ackerman do after spending one month crying following his breakup?

He met his future wife. 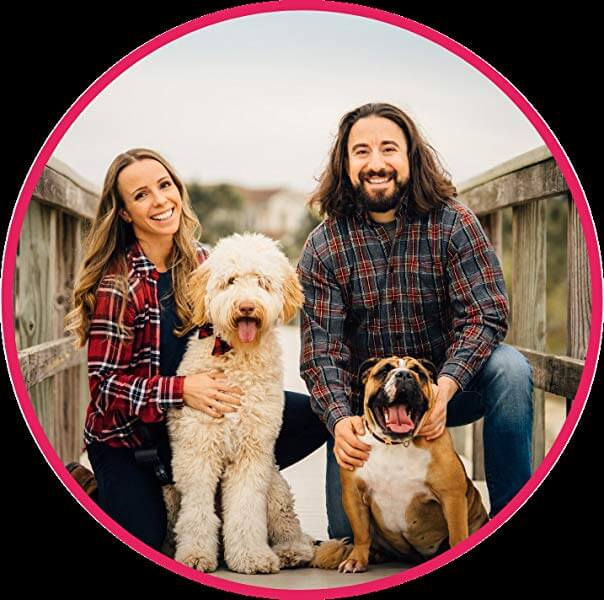 David, a coaching client, felt devastated after his wife broke up with him.

He blamed himself for that and decided to wait for her to come back, going No Contact.

And he wasted 13 months.

Not only did he lose time but he also ruined his confidence in the process.

That said, you do need time to recuperate from your breakup.

It’s time for self-reflection to make your next relationship better.

But too many people stay in that place for too long.

Here are the things to avoid: 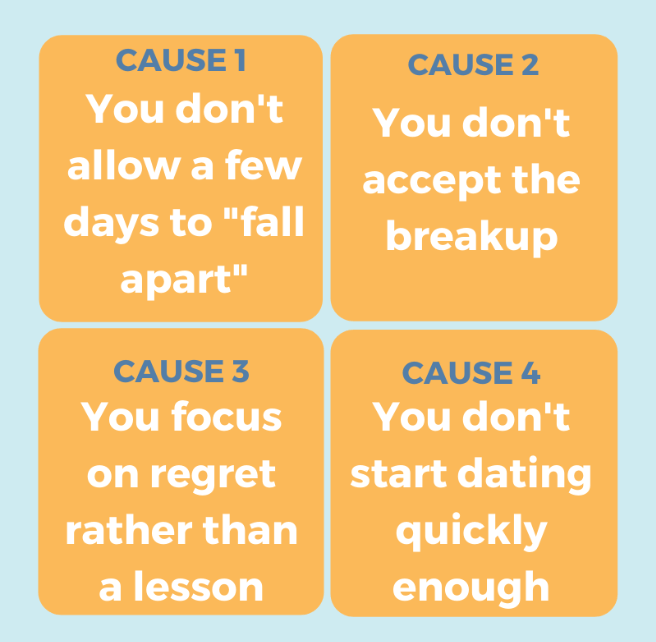 Now that I know why I am not over my ex, what do I do?

Let me suggest a few strategies for dealing with a painful breakup.

In France, from 2007 to 2017, the number of breakups in civil partnerships increased 4-fold.

That means breakups happen more often now than 10 years ago.

That’s why it’s important to recover from them faster.

Otherwise, you’ll waste too much time in your life, wallowing in self-pity. 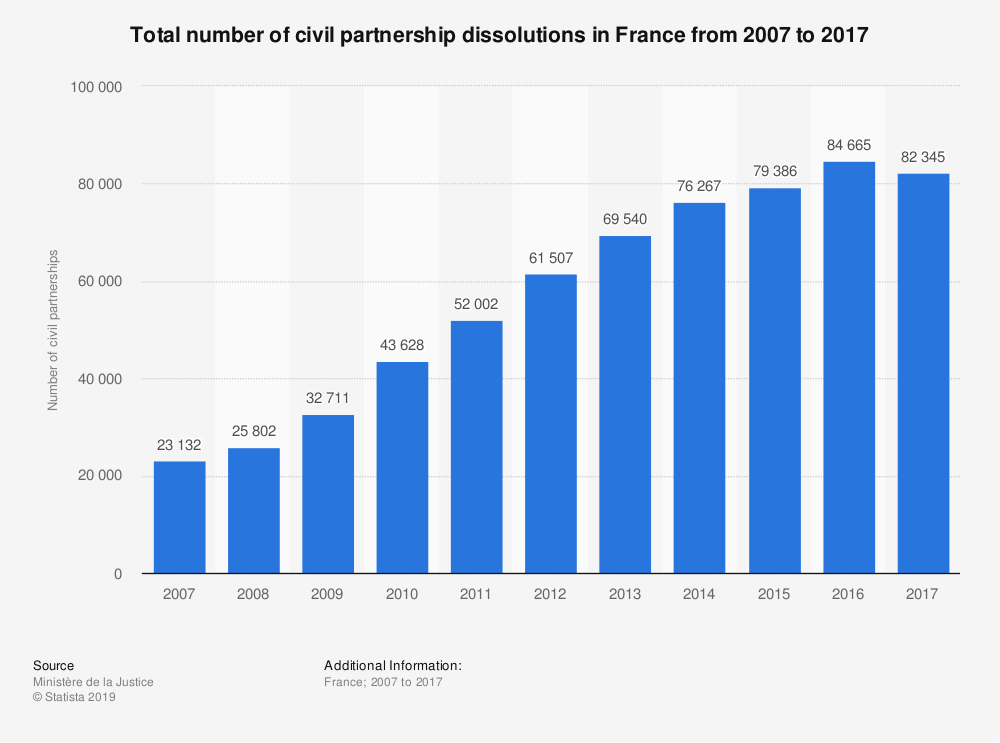 Strategy 1: Create a future-oriented metaphor for yourself

When I went through my divorce, I listened to a song on repeat.

That song was called Starting Over.

I used it as a metaphor to focus on getting better and what was good in my breakup.

See, your mind responds most readily to this kind of metaphor.

You just need to find a metaphor that moves you forward such as the one that I used.

An example of a metaphor that doesn’t help you is a child left alone at home.

It keeps you focused on the loss rather than the brighter future.

Here’s how you can transform this metaphor positively.

You’re a kid on a Christmas night who’s sneaking into the living room to look at Christmas presents.

You’re excited about what the future will bring.

By not accepting the breakup, you’ll do a major disservice to yourself.

The pain will go into your subconscious mind where it’ll influence your beliefs.

And you might even decide that relationships are not good for you at all.

Instead of fighting how you feel, accept your feelings of love and hurt.

Forgive yourself and your ex, even if they didn’t treat you fairly.

Read and believe statements of acceptance:

Strategy 3: Use the Triad

The Triad is a system created by Tony Robbins.

Part 1 of the Triad: Physiology

Our body and mind are interconnected.

For example, when you feel sad (mind), you hunch over (body).

That’s how your body reacts physically to sadness.

But when you force yourself to hunch over (body), you’ll also feel sad (mind).

That’s because your mind associates hunching over with sadness.

So, it’s a feedback loop.

And the good news is that you can “hack” it.

By doing things physically, you can change how you feel instantly.

For example, when you’re broken-hearted:

These purely physical things will help you feel better.

Your mind associates them with positive emotions and taking action.

By doing them, you’ll trigger positive patterns deeply rooted in your mind.

Part 2 of the Triad: Focus

The second part of the Triad is what you think of repeatedly.

Change your focus by focusing on the positive

After my divorce, I couldn’t help thinking about how much I had lost at first.

But then, I realized it wasn’t helping me: I only reinforced my pain.

So, I focused on one good thing about this breakup.

I felt there had been problems in my relationship that I couldn’t have resolved.

And they had caused unhappiness and resentment.

That said, I focused on the fact that I now no longer had those problems.

That changed how I felt.

So, find something positive about your breakup.

And think of it repeatedly.

Change your focus by thinking of something negative

Focusing on the negative after telling you to focus on the positive might sound weird.

But here’s what I mean:

Find something negative about your partner that makes you feel more positive about the breakup.

In a way, you are focusing on the positive.

Think of unfavorable aspects of your lover:

Focus on such an aspect and you’ll feel better.

It’ll help ease the pain of the loss.

Instead, you’ll rewire your mind to think of your breakup as a gain.

That’s how you make the healing process easier.

Change your focus by distracting yourself

Here’s the third way to change what you focus on.

It’s thinking about something else altogether.

Think about positive things unrelated to your ex such as a favorite food.

It might be even okay to think about something that’s not completely healthy.

For example, that might be junk food that you crave but deny yourself normally.

Look forward to eating that food and then allow yourself that guilty pleasure.

It’s way less damaging for your health compared to the stress caused by the breakup.

Part 3 of the Triad: Meaning

The third part of the Triad is about changing the meaning you assign to events.

After a painful breakup, you tend to play a particular statement on repeat in your mind.

These kinds of phrases only make you feel worse.

But you can catch yourself repeating them.

And consciously replace them with more positive ones.

Repeat one such statement to yourself as a mantra.

And whenever the old statement comes up, override it with this new one instantly.

Strategy 4: Get back to the dating world immediately

The sooner you start dating, the better.

Yes, you need to embrace the pain and let it flow out of you.

But don’t stay in that place for too long.

If you keep pitying yourself, you’ll get into your head too much.

Get outside instead and approach other people.

Set a goal for yourself to have 3 dates next week.

As a result, you might not feel excited about your dates at all.

Here’s how to ease the pain of a breakup

I know how you’re feeling because I’ve been through that painful breakup myself.

And I know you want to feel better instantly.

All you need is an action plan.

But creating such a plan and following it is challenging and makes you uncomfortable.

Here’s where my coaching can help you.

I’ll help you create and follow an action plan to heal from the breakup quickly.

You’ll also develop the skills to make your next relationship amazing.

Contact me today for a free relationship breakthrough session.