Looking for the ultimate motivation technique?

Obviously, it’s a must-read for anyone who’s into building muscle.

I think you could double your results at the gym just by reading it.

But there’s so much more to it!

Arnold embodies so many principles of personal achievement.

I’m now ashamed to admit that I always thought there wasn’t much about him other than muscles.

What I realize now, after reading the book, is how hard-working and testosterone-driven he is.

He’s superhuman not only physically, but also psychologically.

His work ethic is unbelievable.

Let me share the principles that I’ve distilled from the book. 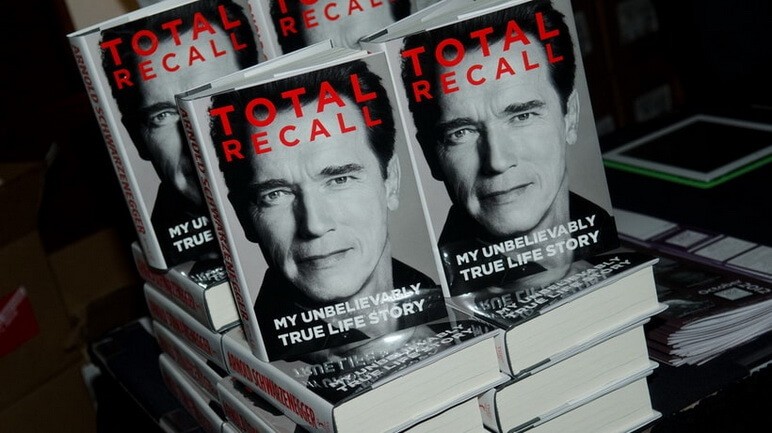 Takeaway 1: Discover and pursue your passion.

That’s what Arnold’s life was about and what the book is ultimately about.

As a kid, Arnold dreamed of being the best bodybuilder in the world, relocating to the U.S., and getting into Hollywood.

And he was relentless about making his dream come true.

He never let anything distract him.

One major challenge he overcame was the unsupportive parents.

They never believed in his dream.

His mother even made him see a doctor because of all those bodybuilder posters he had in his room.

She thought he was gay.

And his father said the gym was a waste of time and he should be chopping wood instead.

Can it get any worse?

You know how people tend to blame their failures on parents.

Arnold is a great example of overcoming the lack of support from his parents and taking 100% responsibility.

They saw me crowned as Mister Olimpia for the third time, breaking the record for the most bodybuilding titles. And they realized, “This is what he used to talk about. His dream that we didn’t buy into.” … This was an important moment, especially for my father who’d always said about my weight training, “Why don’t you do something useful? Go chop wood. 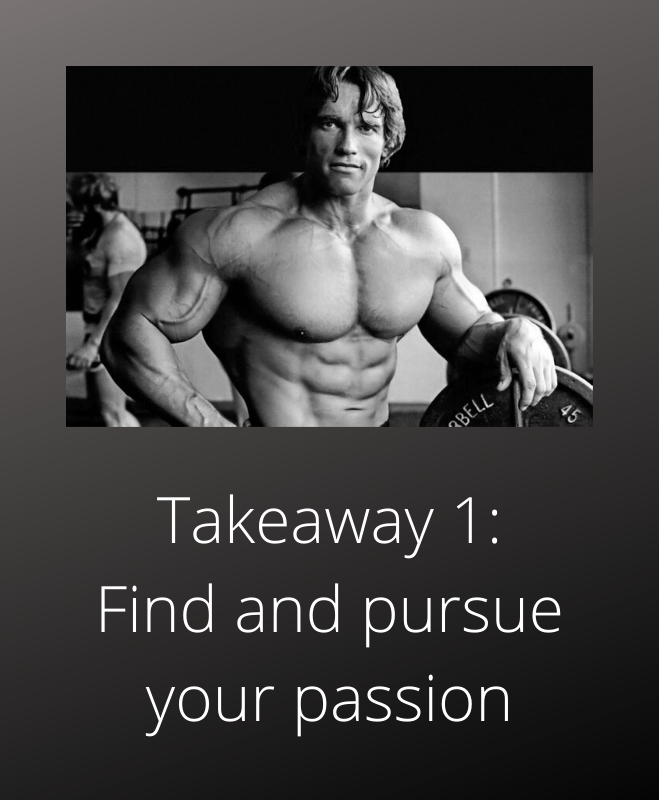 A major problem for many people is setting goals and… doing nothing to achieve them.

Or gathering knowledge instead of taking action.

Arnold is the opposite of that.

For one thing, his workouts were insane.

And then, he was taking tons of action in other areas as well.

From the bodybuilding days on, I learned that everything is reps and mileage. The more miles you ski, the better skier you become. The more reps you do, the better your body. I’m a great believer in hard work, grinding it out, and not stopping till it’s done.

He used to work as a staff member at the gym, in construction, and his various businesses.

Wherever he applied himself, his work ethic was just as strong as at the gym.

Even when he traveled, he looked for opportunities to promote himself and make money.

And he also took a lot of action and risks as an investor.

“If you think too much or know too much about a thing, you’ll likely overthink it and never get down to doing it.”

Example of taking action without overthinking

There is an example of his addiction to action that’s both hilarious and painful.

He went to pose in front of an audience once and there was no posing platform.

Well, he just built one for himself right there.

And ended up breaking it and sustaining a knee injury.

Was it a bad idea to build a platform that couldn’t carry his weight?

But, you know, this approach… “doing instead of overthinking”…

Did it work at other times?

I’d guess it did work many times.

My style was to keep moving and not reflect too much. 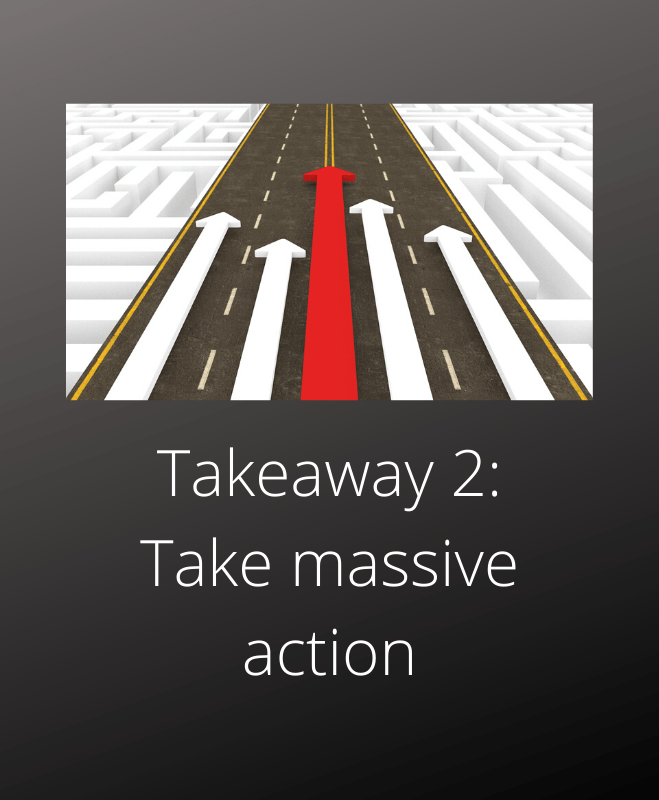 Arnold is fascinated by the concept of learning and made it a habit.

These are some of the things he learned:

Once, he even joked that he had taken about 5,000 courses, but had never got a degree!

“College appealed to my discipline. I enjoyed studying. There was something really nice about having to read books in order to write reports and participate in class.”

Reading Total Recall is thus a great motivation technique for anyone who struggles at school. 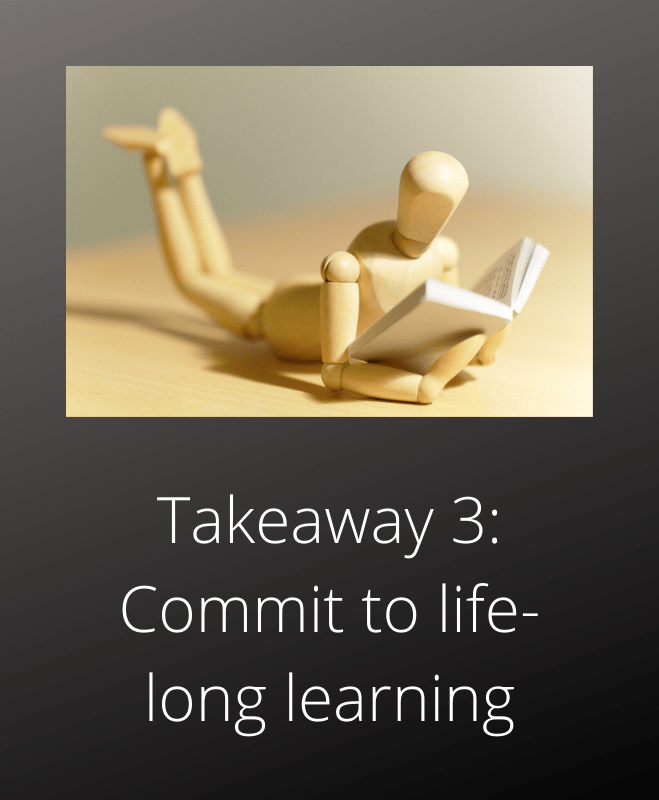 As a bodybuilder, he understood the importance of goals.

He went after specific weights at the gym as well as body measurements.

Then, he carried this goal-setting habit into other areas of his life.

I always wrote down my goals… It wasn’t sufficient just to tell myself something like: “My New Year’s resolution is to lose 20 pounds…” That was only a start. Now I had to make it very specific so that all those fine intentions were not just flirting around. I would take out index cards and write that I was going to get 20 more units in college, earn enough money to save 5,000 dollars, work out 5 hours a day, gain 7 pounds of solid muscle, find an apartment building to buy and move into.

Nothing was going to distract me from my goal. No offer, no relationship, nothing. 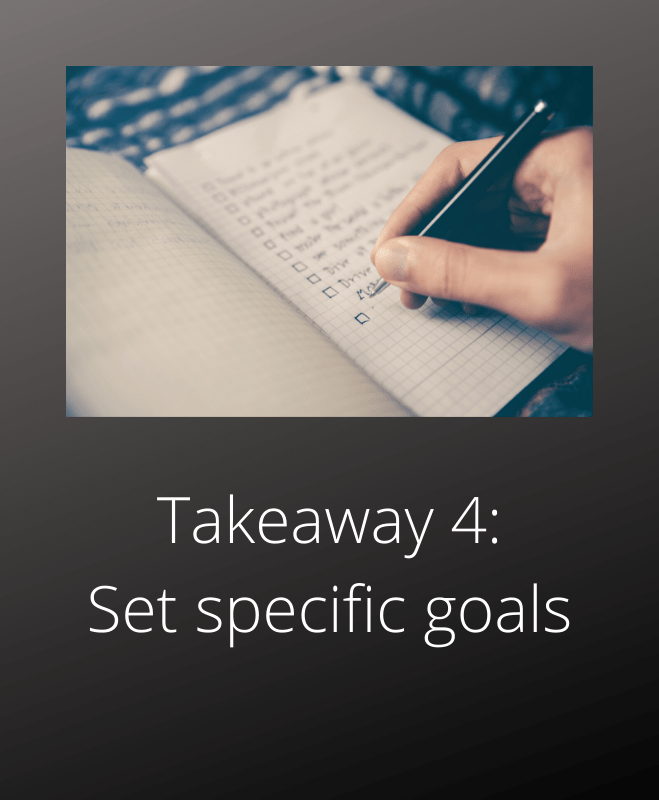 Arnold was keen on spending as little money as possible in his early years.

“Clothes were just not part of the plan. Every dollar should be invested to turn into two or three dollars and make me financially secure.” 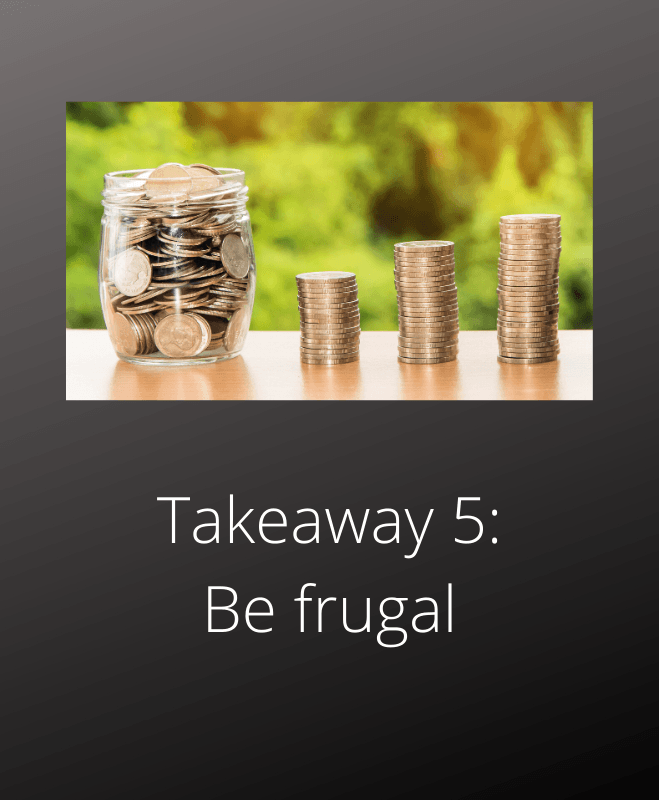 Arnold would clean up his place right in the morning so that it was perfect.

No one around him, especially girls, could compete with that tidiness.

Keeping your environment tidy builds your discipline which then flows into other areas of your life.

Plus, a tidy environment is conducive to high-quality work as well as sleep.

There’s no clutter to distract you.

If you struggle in this area, reading Total Recall is a great motivation technique for stopping clutter. 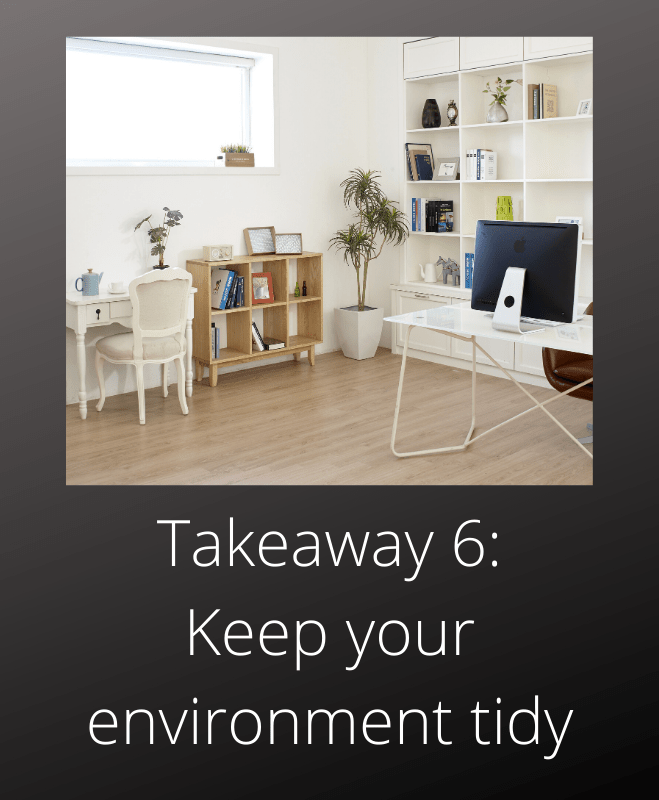 Takeaway 7: Be an investor.

Arnold always saw his home as an investment first, and only then as a place to live.

If you buy real estate on credit to live in it, you lose money by paying your mortgage.

If you see it as an investment, though, you rent it out.

And then, it pays for your mortgage while also appreciating.

Two of the bodybuilders who have escaped from Czechoslovakia and come to California just before me had taken their savings and bought a little house to live in. That was fine. But they still had to pay the mortgage. I wanted an investment that would earn money so that I could cover the mortgage through rents instead of having to pay it myself. 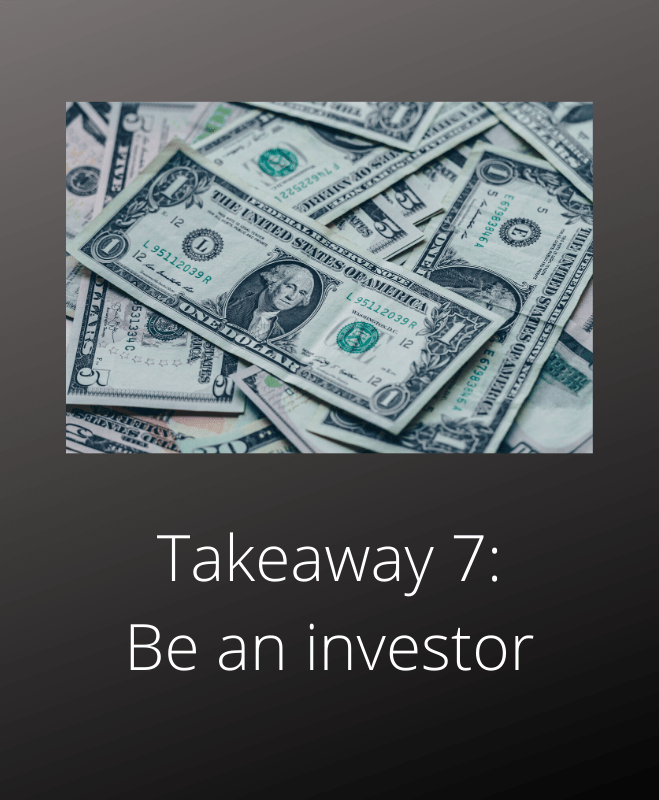 He did two 20-minute meditation sessions: in the morning and at night.

He was able to:

Reading about how Arnold meditated is a motivation technique that keeps me committed to meditating every day. 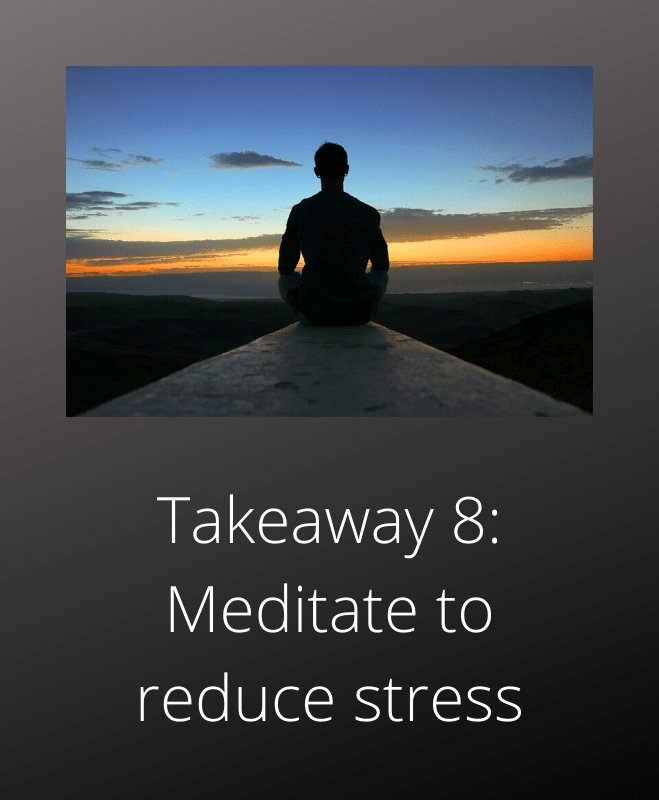 That’s the only way you can feel its true power as a motivation technique.

Get the feel of Arnold’s testosterone-driven passion.

It just might be one of those books that inspire you to live a full life.

Say, you read a biography of someone like Warren Buffet.

You get a lot of knowledge, but not necessarily the taste of passion.

And Total Recall is a story of raw passion.

If you were to learn just one thing from this article, it’s to read the book.

It’s going to be a total inspiration. 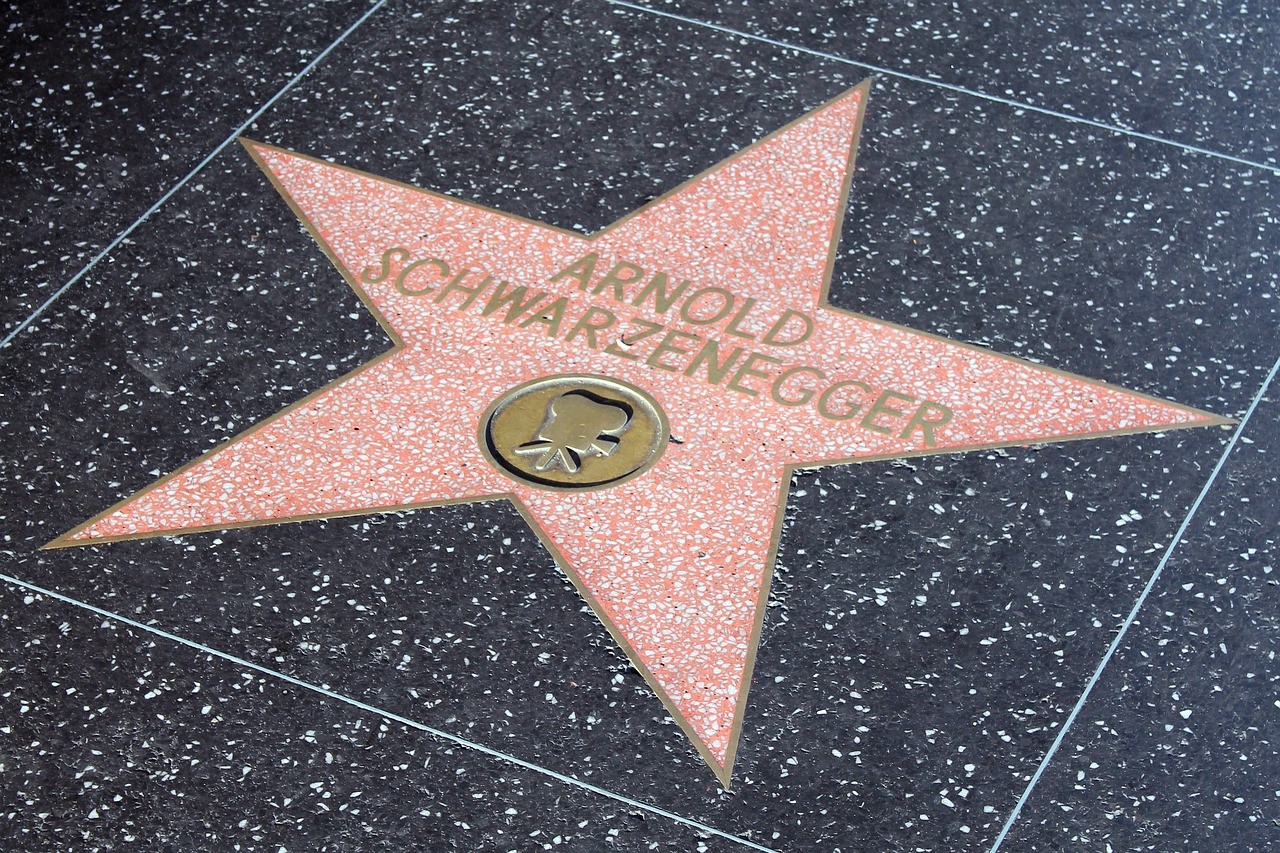 As a life coach, my goal is to motivate you and give you tools to improve your life based on the principles described in this article.

Contact me today for a free coaching session to see how I can help you.