I Will Never Be Happy – 5 Mistakes That Are Killing Your Happiness | Podcast Ep. #29 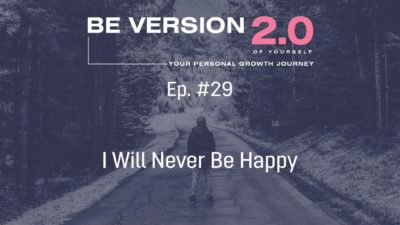 “I will never be happy.”

If that’s your mantra, you need to meet Mr. Butler.

He’s a character in a novel Martin Eden by Jack London.

He ended up realizing, “I sacrificed everything for money and now I will never be happy.”

Today, I’m going to break down his mistakes to help you become happier.

If you’d rather listen then read, here’s the companion podcast episode:

Charles Butler went to work at a young age.

He worked in the daytime and studied at night.

He began as an office boy at a law firm and quickly progressed to a clerk and then junior partner.

Butler denied himself any enjoyment in life and saved money.

Soon, he was rich.

He reached his goal but was he happy?

Mistake 1: He sacrificed happiness for his goal.

Layin’ up money, workin’ all day an’ studyin’ all night, just workin’ an’ never playin’, never havin’ a good time, an’ never learnin’ how to have a good time–of course his thirty thousand came along too late.

Butler wired himself to be happy only when he got his goal.

And in the process of getting there, he lost something important: his ability to enjoy life.

An’ I bet that he’s solemn an’ serious as an old owl, an’ doesn’t care a rap for a good time, for all his thirty thousand a year.

He thought money would make him happy and felt jealous of rich people.

But then he got rich and felt jealous of happy people.

An’ I’ll bet he’s not particularly joyful at seein’ others have a good time.

Mistake 2: He focused on making money.

He could not find an adequate motive in Butler’s life of pinching and privation. Had he done it for love of a woman, or for attainment of beauty, Martin would have understood.

Butler erroneously assumed that money would make him happy.

And he failed miserably.

Money does provide comfort but not necessarily happiness.

He should’ve focused on being happy rather than making money.

Focusing on doing what he loved and service to other people.

Then he would’ve been happy.

And he would’ve also made money because he would’ve been naturally good at doing what he loved.

Mistake 3: He ruined his health.

Butler’s dyspepsia is a perfect metaphor for how we already have what we need to be happy.

He had his health and ability to enjoy life but thought that wasn’t enough.

And when he got rich, he couldn’t enjoy it because of dyspepsia.

At that point, he realized that he should’ve been happy when he still had had his health.

Mistake 4: He was stingy.

Butler was too economical.

And he pushed himself into a scarcity mindset.

He held onto his money even when he became rich.

What’s the point of being rich if he wired himself not to be able to enjoy his money?

Mistake 5: He wasted his golden years.

Why, thirty thousand, lump sum, wouldn’t buy for him right now what ten cents he was layin’ up would have bought him, when he was a kid, in the way of candy an’ peanuts.

Kids can be 100% present in the now wherein lies our happiness.

Butler didn’t make use of those golden years.

He never learned to be playful in life.

He taught himself to be serious.

And that’s a state that makes it hard to be happy.

I feel sorry for Butler. He was too young to know better, but he robbed himself of life for the sake of thirty thousand a year that’s clean wasted upon him.

Don’t be Mr. Butler so that you end up saying, “I will never be happy.”

20s should be years of experimenting and exploring what you love and what you want in life.

As soon as you find it, buckle down and pursue it with all you have.

With that said, don’t miss out on life entirely.

There are things you won’t be able to do later.

Get happier with coaching

If you need help becoming happier, check out my coaching services.

You’ll smile more every single day even if you have challenges.

And you’ll cheer everyone around you.